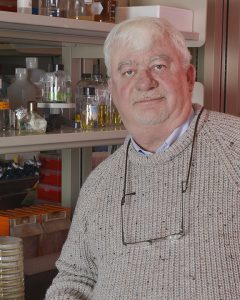 Antibiotics have saved millions of lives and prevented serious medical consequences from infections since their introduction in the mid-20th century. Unfortunately, over the years bacteria evolved many ways to counter the action of antibiotics. Presently, in the United States over 23,000 people die each year from an infection caused by bacteria that are resistant to one or more classes of antibiotics.
Bill Shafer, Ph.D. is a Senior Research Career Scientist at the Atlanta VA. His laboratory studies a mechanism of antibiotic resistance that is common to virtually all bacteria. Specifically, this mechanism is based on bacterial pumps that can remove antibiotics from inside the bacteria once they have been absorbed. This reduces antibiotic efficacy enabling bacteria to survive despite antibiotics. These antibiotic-resistant bacteria often over-produce these efflux pumps.

The study found that many strains of Neisseria gonorrhoeae that express resistance to antibiotics have a single change (mutation) in their DNA that allows them to over-produce efflux pumps. This finding illustrates how easy it is for bacteria to develop resistance to antibiotics and emphasizes the importance of efflux pumps in antibiotic resistance. Based on this information, the Shafer lab is now exploring new ways to target these efflux pumps to develop better therapies to manage infections with antibiotic resistant bacteria.